This year IVDC, Inter-Varsity Dance Competition (known as 'the nationals'), was hosted by Nottingham University in the Empress Ballroom, Blackpool Winter Gardens. The Cambridge team had a truly wonderful day, winning the overall team title and the A, B and D team trophies. The opens also saw some fantastic results. 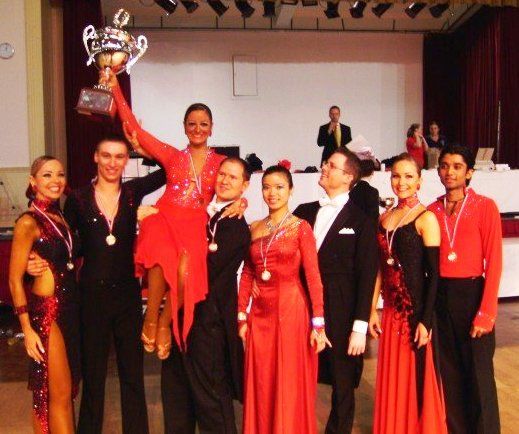 This year SUDC, Southern Universities Dance Competition, was hosted by Bath University. The Cambridge team continued to show their superb form to win the overall team match title along with the A and B team trophies.

The day was quite gruelling, especially as the coach left Cambridge at 5am and didn't return until 3am the following morning - some of us are still recovering! After nearly four hours of travelling it took a lot of effort for us to transform from dishevelled, sleep-deprived, blurry-eyed students, into dazzling, diamante-embellished stars of the dance floor! Once the open competitions got under way it became apparent that the standard had improved quite dramatically. However, we were not intimidated, and Cambridge left a striking impression in the open section. The beginners once again faired well against some very good competition. In the novice ballroom Hiroki Hashimoto & Olivia Turner won and Meredydd Luff & Yumi Yang also made the final. In the intermediate latin (cha, samba and jive) Daniel Schmidt & Elaine Cameron came second. The advanced events were of a very high standard this year with Cambridge contributing over half the couples to the advanced finals. In the advanced modern Paul & Vesna won with Nejc & Pauliina third and Blaise & Fely fifth. The advanced latin was won by Shiraz & Nicola with Nejc & Diane fourth and Alex & Lenka in their first advanced final finished fifth. After the open events the team match took place and Cambridge ended the day on a high by winning the overall SUDC team title. In the team waltz Cambridge A, Blaise & Fely came 4th and Cambridge B, Kunal Gupta & Olga Shevnyuk came sixth. The team quickstep was won by Cambridge A, Paul Fanon & Vesna Kadelburg, and Cambridge B, Chris Horner & Mary Issitt came third. Cambridge A, Nejc Jus & Diane Williams came second in the team Cha, with Cambridge B, Alex Marsh & Lenka Vackova finishing fourth. The last team dance was the Jive which Cambridge A, Shiraz Badurdeen & Nicola Gray won Cha was won and Cambridge B, Daniel Schmidt & Elaine Cameron finished sixth in the final.

In the opens during the day Cambridge took a commanding position, dominating many of the finals. The beginners performed well in the early competitions, with Keir Shiels & Anna Schaupp winning the Cha cha. Keir & Anna also made the Waltz and Jive finals, where they were joined by Yuki Tokeshi & Catherine Charlwood who took third place in the Jive showing us the huge potential for the future that exists in the beginners team this year. The Cambridge supremacy continued in the open Foxtrot and Advanced Viennese Waltz where half the couples in the final were from Cambridge. If that wasn't enough Paul Fannon & Vesna Kadelburg, representing Cambridge, won both these events. The Cambridge domination continued in the latin events. Notably the intermediate Rumba was won by a new team partnership for this season, Sergei Petukhov & Pauliina Markkula. They were closely followed by Kunal Gupta & Olga Shevnyuk in second place and Daniel Schmidt & Elaine Cameron in fourth. In fact, in the intermediate latin five out of the top ten couples were from Cambridge! The advanced Paso had Shiraz Badurdeen & Nicola Gray, Nejc Jus & Diane Williams, and Paul Fannon & Vesna Kadelburg all place in the final. The open Samba also saw these first two couples place third and fourth respectively in the final where they were joined by Chris Horner & Mary Issitt who came sixth. The many individual successes during the day forecast good things for the team match in the evening and the couples didn't disappoint, with many actually saving their very best for the evening events. Cambridge A team won the overall A team trophy by winning the Waltz, Quickstep and Jive, and finishing a close second in the Cha cha. Cambridge B and Cambridge C teams also delivered, collecting the B and C trophies for their efforts. To complete the day the Sheffield knock-out competition was held. Almost needless to say, Cambridge won this too beating Imperial College and Liverpool University in the final with a mixture of gutsy performances by team members, a well thought out strategy and a lot of cheering. A big 'thank you' must be said to all those who cheered on Cambridge to victory at the weekend.

Congratulations to all dancers who went to Nottingham on the 25th November 2006 to compete for Cambridge University. The first competition was a huge success for CUDT and has set the tone for the season ahead. CUDT returned from Nottingham victorious in the A, B and C team matches, and narrowly missed out on the D team trophy coming second, with an impressive 14 out of 16 D team couples making their respective semi finals.